You cannot come to Istanbul and not see these heritage sites. It reflects the rich ottoman architecture of Istanbul. Blue mosque is an ancient mosque built in 1600s and still continues to function as a mosque till this date where people offer prayers five times. Hagia Sophia, is a former Christian church which was later announced as imperial ottoman mosque now stands a museum. Topkapi museum is a former palace which served as the main residence and administrative headquarters for the ottoman sultans before they moved to Dolmabahçe palace. All these three sites are within 100meters of each other and can be visited on the same day if you start your day early however all three are closed on different days so it would be good choose a day for your sightseeing when all three are open to public. While blue mosque is open every day, Topkapi museum is closed on Tuesdays and Hagia Sophia is closed on Mondays so it would be ideal to choose a day other than these. Cost of ticket for Hagia Sophia is 60tl and Topkapi museum are 40tl pp while blue mosque entrance is free, women are required to cover their heads and dress appropriately while entering the mosque.

2. Scenic view from the top of Galata tower

Galata tower is an ancient tower located in the by lanes of karaköy area. It’s a nine storey tower and you may have to walk a bit to reach the the base of the tower but the view on the top totally makes it worthwhile. The elevator takes you to three floors down the deck from where you have to take the stairs to reach the deck. This floor also has a photo booth where you can get yourself clicked wearing traditional Turkish costumes. The observatory deck has a 360 degree view from where you can see the Bosphorus bridge. The towers also has a simulation helicopter ride to give you 3D view of all the historical places in the city and if all that scenic view makes you hungry there are two restaurants, one on the deck and one below for you to enjoy a meal with a view. The cost for the tower is 25tl pp along with 10tl for simulation ride. Since we had a toddler with us we were not allowed for the simulation but you could totally give it a try.

Historically Taksim Square was inaugurated to celebrate the fifth anniversary of republic of turkey after years of war. Today it stands as the heart of modern day istanbul. You could say this is the downtown of Istanbul with young crowd wandering on the streets. The cool and vibrant vibe can immediately lift up your spirits with various artists showing their talent on the streets as you stroll along. Its bustling with restaurants, nightclubs and shopping mall. It has several chain of international restaurants like McDonald’s, KFC, Starbucks, Pizza Hut etc as well local vendors selling Donner kebabs, shawarma. The street leads up to Istiklal Street which is known as the food street of Istanbul. Taksim also has the nostalgic red and white heritage tram to give you a tour of the istiklal street. So hop on the tram to enjoy the ride. 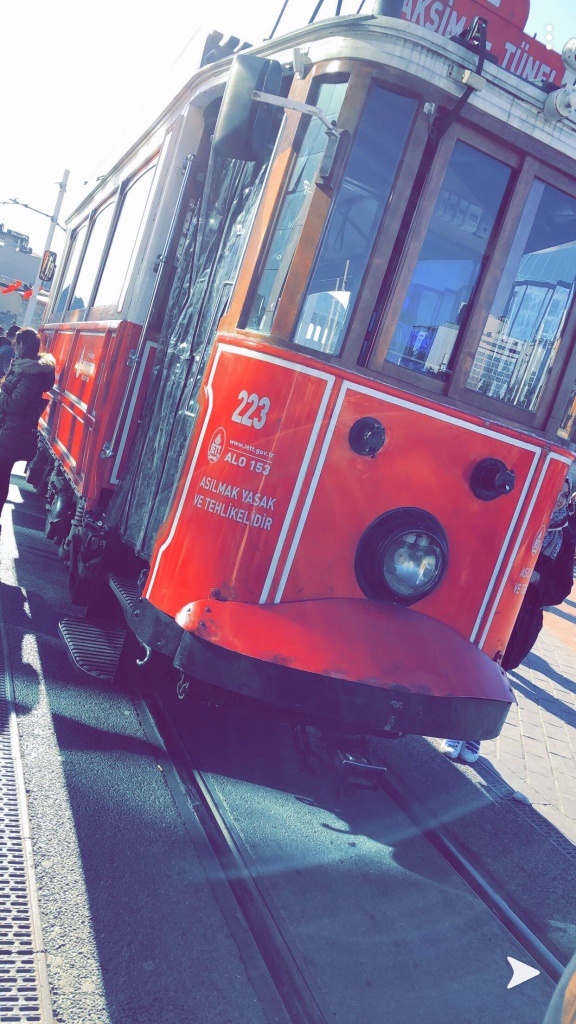 Grand bazaar literally translates as grand/ big market. It is one of the oldest markets in Istanbul and has everything under one roof. It’s a covered market place and bustling with people which can make you a bit claustrophobic if visiting during peak hours. If you are looking to take some souvenirs back home for your family and friends then this is the place. You can buy various local artifacts and souvenirs along with spices, dry fruits ( sweetened and unsweetened ), Turkish chocolates and tea. The bazaar is huge and divided into different sections. The leather section has leather jackets, shoes, belts and bags. There’s a variety of Turkish cutlery with beautiful designs and silver jewelry for both men and women. Make sure you bargain and visit 2-3shops before buying anything because the prices might differ everywhere and people can give counter offers. The market is open from 9am to 7pm and closed for Friday prayers. The best time to visit would be early in morning before the crowd gathers. 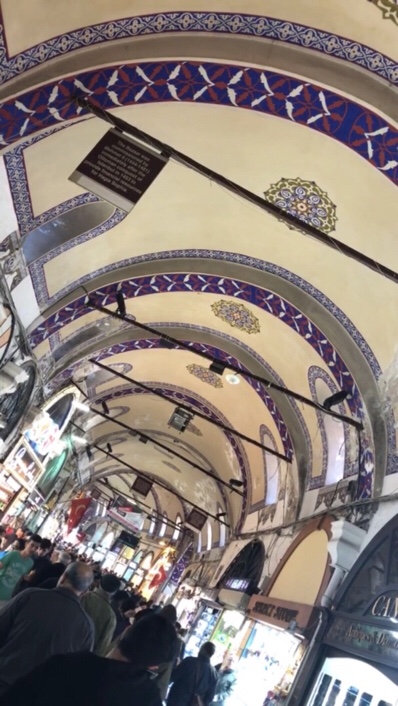 Istanbul is an island city and boats are used as mode of local transport. You can see a lot of yachts, boats used for tourist purposes. A boat tour gives you a glimpse of the magnificent bosphorus bridge that connects the Asian and European sides of turkey. You could take a whole day long cruise which halts at various tourist spots or short boat tour for a closer view of the bridge. These boats are equipped with food , entertainment and other recreational activities. Depending on what experiences you want and the time on your schedule you can book a tour. The bridge is beautifully lit up by the night. It’s an experience you do not want to miss.

Now this is not a must do thing but it’s such a cheaper and convenient mode of traveling in Istanbul given its connectivity and easy access. I would totally suggest you to ditch the cab (if you don’t like being stuck in traffic ) and take the tram since it can take you to every possible destination in the city. All you have to do is make a metro card which will cost around 10 lira and keep filling it whenever required. This metro card can be used in tram, busses and metro as well and when you are returning home you can deposit this card and get a refund of 5lira so in all this card would only cost you 5lira which I think is quite reasonable.